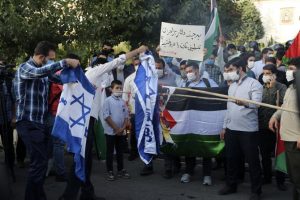 Iran threatens to attach UAE over Israel deal. President of Iran Syed Hassan Rouhani said the UAE has made a “huge mistake” and condemned what he called a betrayal.

front-page editorial: “The UAE’s great betrayal of the Palestinian people will turn this small, rich country, which is heavily dependent on security, into a legitimate and easy target,”.

Iran has already targeted Saudi civilians with missiles launched by its proxy forces in Iraq and Yemen, and security analyst Dr. Theodore Karasik told Arab News the new threat should be taken seriously.

“Iranian missiles could hit the UAE in eight minutes,” said Karasik, a senior adviser to Gulf State Analytics in Washington, D.C. “They can target critical infrastructure, or they can simply target the desert in an act of psychological warfare. “Recent Iranian naval exercises featured missiles that came from an underground launcher.

This was new and set off an alarm. Nevertheless, Dubai and other urban centers are still considered safe zones.”
Last week’s agreement, brokered by US President Donald Trump, established diplomatic relations between the two countries for the first time, while Israel halted plans to annex swaths of the West Bank.

Ali Abdullah Al-Ahmed, the UAE ambassador to France, told the French-language edition of Arab News there was more to come. “What will follow will not be confined to the political level but will equally cover the economic, technological, and academic levels,” he said.

“It is highly possible that the tempo of the development of these relations will be faster, we will see.” The ambassador rejected claims that the Palestinians had been betrayed. “We do not negotiate in the name of the Palestinians and it is not up to us to do so,” he said.

“Our position regarding the Palestinian cause is in line with the Arab consensus regarding Jerusalem and other parameters of Arab unanimity, we adhere to them and we do not relinquish them.”

Meanwhile, Turkish President Recep Tayyip Erdogan was accused of double standards after he threatened to sever relations with the UAE over the agreement while maintaining diplomatic and trade ties with Israel.

“Turkey has a hypocritical stance,” said Seth J. Frantzman, executive director of the Middle East Center for Reporting and Analysis. It was a deliberate choice by Ankara to distract attention from economic failure, he said.
“Ankara, guided by its current ruling party, is moving toward becoming the most anti-Israel regime in the region.”