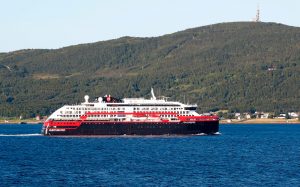 More 40 passengers tested positive for Covid-19 on a Norwegian cruise ship. More than 200 passengers who traveled on Norwegian Cruise Ship named – MS Roald Amundsen are in quarantine. the owners of the ship’s company said.

Daniel Skjeldam – CEO said: The situation is very serious for everyone involved in traveling on the ship. We have not been good enough and we have made mistakes. The evaluation shows a breakdown in several of our internal procedures”.

The Norwegian government has announced that they will stop all cruise ships including more than 100 people on board from disembarking passengers for at least 14 days and police said that they are also investigating whether any regulation or specific law had been broken prior to the outbreak on the Roald Amundsen.

Four members admitted to the hospital on Friday with coronavirus symptoms, shortly after the ship docked in the Arctic port of Tromso, and they later tested positive for the virus. 32 crew members on board were found to be infected.

Almost 180 passengers were allowed to depart the ship on Friday, leaving the authorities scrambling over the weekend to locate and test those who had been on board.